When I was in high school, I ate all my lunches in the library. Most of my friends weren’t on the same lunch schedule as I was, plus my creative writing independent study was the period right after lunch, so it kind of made sense—I could go in early, eat there, and read. Then, when the bell rang, I’d be ideally situated to start working on my book. I got to know the librarians, a couple named Mr. and Mrs. Larson, pretty well during that time; they’d frequently bring in secret doughnuts that were only meant to be shared with those of us who basically lived in the library, who came to school early so we could browse the stacks, who checked out so many books every week that the Larsons had to raise the weekly limit just for us.

I was also struggling with depression.

And maybe that had more to do with my library lunches than I could admit.

Felicity, the main character in A Lesson in Vengeance, also struggles with depression. I can see reflections of my younger self in her: the way she self-isolates, how she constructs these narratives for her own life, ones she thinks are maybe more palatable than the truth. She, like myself, loses herself in literature, in other worlds that aren’t her own, where she doesn’t have to exist in the space of her own body and life.

Sometimes I wonder how much of that the Larsons recognized in me. I missed several weeks of school at various points when I was hospitalized for suicide attempts. I wonder if they knew why I was gone. Either way, they were a touchstone for me throughout high school. By the end, I had started calling them my parents, because in a lot of ways it felt like they were—always ready with good advice or a warm embrace or even just a fresh Krispy Kreme.

They’re the kind of people I think Felicity needed, too. Maybe if she’d had her own Larsons, she would have known on some level that people existed—particularly adults—who were there for her, who cared enough to still be there when she rose out of the mire of another episode.

When I graduated high school, though, I had to finally bring back all the library books I’d been sneaking out of the media center for the past four years. (Even the Larsons’ inflated check-out limit was not enough for me.) I left them in several huge black trash bags just inside and crept off, humiliated. I didn’t leave a note. I figured they had no way of knowing it was me; those books could have been left there by anyone. But then the phone rang a week later and my mother—my biological mother, not my library mother—picked up. It was Mrs. Larson.

She wanted to thank me for returning all those books. 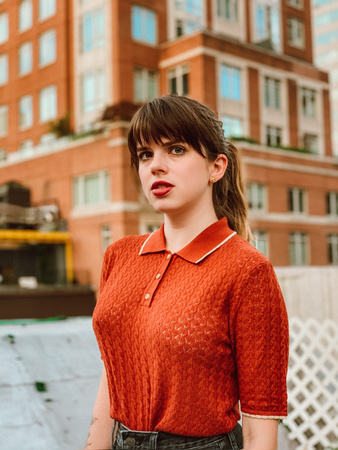