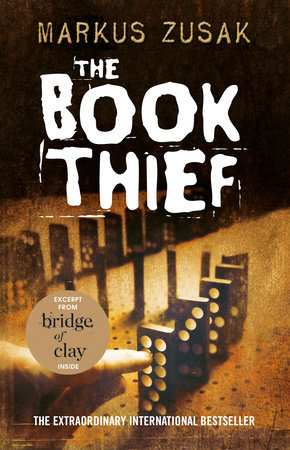 The Book Thief By Markus Zusak

Liesel Meminger is only nine years old when she is taken to live with the Hubermanns, a foster family, on Himmel Street in Molching, Germany, in the late 1930s. She arrives with few possessions, but among them is The Grave Digger’s Handbook, a book that she stole from her brother’s burial place. During the years that Liesel lives with the Hubermanns, Hitler becomes more powerful, life on Himmel Street becomes more fearful, and Liesel becomes a full fledged book thief. She rescues books from Nazi book-burnings and steals from the library of the mayor. Liesel is illiterate when she steals her first book, but Hans Hubermann uses her prized books to teach her to read. This is a story of courage, friendship, love, survival, death, and grief. This is Liesel’s life on Himmel Street, told from Death’s point of view.

Teaching Resources for The Book Thief

Praise for The Book Thief

★”Exquisitely written and memorably populated, Zusak’s poignant tribute to words, survival, and their curiously inevitable entwinement is a tour de force to be not just read but inhabited.” —The Horn Book Magazine, Starred

“One of the most highly anticipated young-adult books in years.” —The Wall Street Journal