Welcome to Fresh Voices! In this new series, we are excited to share with you authors whose books capture a unique aspect of the human experience. Enjoy this Q&A with Katherine Locke and Nicole Melleby about their anthology, This Is Our Rainbow! 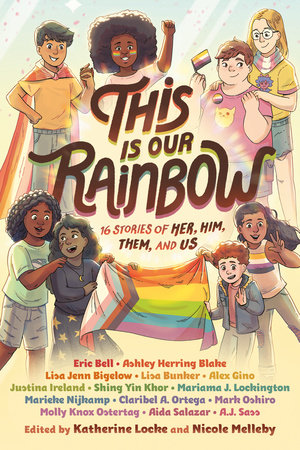 1. What gave you the idea to create this anthology? How did you go about choosing which contributors you wanted to participate?

Nicole and Katherine: Dahlia Adler, another queer author who runs LGBTQreads.com and has put together a bunch of anthologies herself, had tweeted something like, someone should be putting a queer MG anthology together if they’re not already. Nicole said, I would love to, but I am absolutely not equipped to do this, I have no idea how. And that was when Dahlia said, look, Katherine Locke has done it before, and they’re great, so I’m going to pair you two up. We talked and realized that we had similar visions for the project, so we decided to go for it.

Choosing the contributors was really a matter of, okay, how many voices can we include in this anthology? How many different identities could we have stories for? And we started making lists of the authors who always pop into my head when I think about queer kid lit. At the end of the day, it was more about wanting to appeal to as many different types of readers as possible, in addition to reaching as much representation as possible, than it was just reaching out to our friends or anything like that.

2. What was the most difficult part about writing your short story for the anthology? What part was the easiest?

Nicole: My answer for both “most difficult” and “easiest” is actually the same exact answer: Keeping it short! This was my first time writing a short story for a project. On the one hand, it was so nice to be able to really hone in and focus on a really simple emotional thread and run with it. On the other hand, I wanted to make sure I was able to do the character and story justice, just as much as I did having only around 5,000 words as I do when I have 50,000 words to play with. I was also able to take my pitch of “What if the song Stacy’s Mom was about a queer girl?” and use it. It’s a little too simplistic for a full length novel, but was perfect for this, so I was excited to finally have the chance to use it.

Katherine: This was my first time writing something fully secondary world fantasy for publication, I think, and so stuffing enough world building into a limited amount of words was a challenge! But I think the easiest part was the representation. Writing Jupiter, my little pirate protagonist, as nonbinary felt so right that I’ve never questioned or wondered about writing them in any other way. I loved writing a world where their identity isn’t questioned or a problem, where their gender identity is accepted by their family, where their sister is queer and married and normalized. Pirates already buck the system in so many ways, it was fun to think about them bucking the cisheteronormativity that might exist on land.

3. Aside from your short story, is there another short story that you identify with the most, and why?

Nicole: I’m going to cheat and name two stories: “The Makeover” by Shing Yin Khor, because I constantly struggle with how I want to dress and present myself. Being quarantined during the pandemic actually helped me let go of some hang ups I had about appearances and start allowing myself to dress and look how I actually wanted. Having a group of friends to help support you finding your own personal style, whatever that may be, is such a wonderful concept.

The other story is “Menudo Fan Club” by Aida Salazar. I cannot even tell you how many times growing up—and into adult hood—I made up a male celebrity crush on the spot just so that things wouldn’t get awkward and I wouldn’t have to try and explain why I didn’t actually like any of the male celebrities that way.

Katherine: I also really loved Shing Yin Khor’s “The Makeover.” It’s the one that made me cry when I read it because I felt so seen. But I also really love Marieke Nijkamp’s “Splinter and Ash.” As someone who grew up on Tamora Pierce and absolutely adored the Tortall books, I am hungry for stories that feel like Tortall, but with gender and sexuality and disability representation that feels authentic and daring.

4. What do you want young readers today to take away from this anthology?

Nicole and Katherine: We really just want them to know that they’re not alone. And, ultimately, this is an anthology full of queer joy, and we want all of our readers to be able to experience that joy themselves. Even if they are not at that point in their own lives, we want them to see the possibilities. Possibilities are incredibly powerful.

5. What are you currently reading?

Nicole: I am currently reading advanced copies of two really special books: The Ogress and the Orphans by Kelly Barnhill (out March 8, 2022) and In the Key of Us by one of our fabulous contributors, Mariama Lockington (out April 26, 2022).

Katherine: I’m currently jealous of Nicole’s early copies! I am reading Little Thieves by Margaret Owens and The Other Talk by Brendan Kiely, both out now. 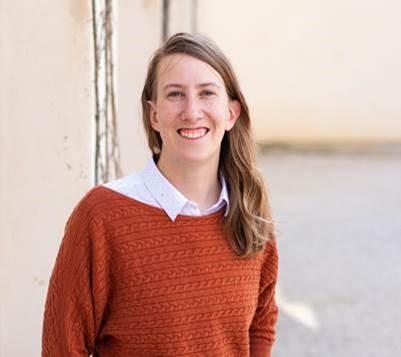 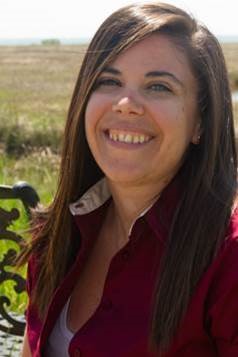