Ava Lee has lost everything there is to lose: Her parents. Her best friend. Her home. Even her face. She doesn’t need a mirror to know what she looks like–she can see her reflection in the eyes of everyone around her.

A year after the fire that destroyed her world, her aunt and uncle have decided she should go back to high school. Be “normal” again. Whatever that is. Ava knows better. There is no normal for someone like her. And forget making friends–no one wants to be seen with the Burned Girl, now or ever.

But when Ava meets a fellow survivor named Piper, she begins to feel like maybe she doesn’t have to face the nightmare alone. Sarcastic and blunt, Piper isn’t afraid to push Ava out of her comfort zone. Piper introduces Ava to Asad, a boy who loves theater just as much as she does, and slowly, Ava tries to create a life again. Yet Piper is fighting her own battle, and soon Ava must decide if she’s going to fade back into her scars . . . or let the people by her side help her fly.

A letter from the author

An eight-year-old boy named Marius taught me this powerful truth. When I first met Marius more than a decade ago, I knew a fire had taken both his parents and left him severely burned. I expected to meet a victim. He had lived through unimaginable pain and dozens of surgeries. I knew his physical scars drew stares from strangers and cruel teasing from peers. How could he be anything but angry?

Instead, I met a smiling, vibrant eight-year-old who wanted to show me his latest magic trick. Yes, Marius was burned. But he was also just a boy who loved card tricks and trampolines. I was immediately struck by his unwavering confidence that he was so much more than his scars, so much more than his tragedy.

It made me wonder—how does someone find this kind of strength in the face of so much pain?

For Marius, the answer was simple: he didn’t do it alone. When he wanted to give up, there was always someone there. A nurse. A friend. Someone helping him choose to live.

In Scars Like Wings, Ava’s story also begins with heartache, pain, and loneliness. She doubts she’ll ever be “normal” again after a house fire claims her parents and leaves her with severe scars. But as she lets people in, she realizes she doesn’t have to face the pain alone.

Not all teens who read Ava’s story will have been through a house fire. Few will know what it’s like to recover from burn injuries or lose a parent. But all teens are recovering from something. Each reader will have something that has interrupted their life, knocked them off kilter, and forever changed them. Like Ava, they have a choice. They can choose to be angry and isolated in the face of trauma, or they can let people in and find a new normal, together.

Teens need stories that help them make that choice. How do you pick love when you’re filled with anger? How do you find self-worth when the world mocks you? How do you survive?

Ava finds the answers in the people by her side. Her true friends see beyond her physical scars, and help Ava realize that the love we let in—and give out in return—determines the trajectory of our lives more than tragedy ever could.

Ava also comes to realize that survival is a choice. While she refers to herself as a burn victim at the beginning of the book, by the end, she uses the word survivor. Like Ava, every reader who picks up this book will be fighting their own battle. And they will have scars, some physical, some hidden. But all their scars tell the same story: I survived.

I hope as readers join Ava on her journey, they will learn how to keep surviving and keep choosing love every single day. Even though we cannot fix each other’s scars, we can be stronger together. 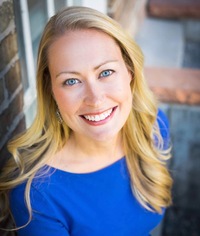 Erin Stewart grew up in Virginia and now makes her home in the shadow of the Rocky Mountains with her husband and their three children. Erin loves using her background in journalism to research and write fiction based on real life. A heart-failure survivor and adoptive mother, she believes life throws plot twists and people in our path for a reason—always. She is the author of the acclaimed YA novel Scars Like Wings.

Watch a conversation between Marius and Erin!