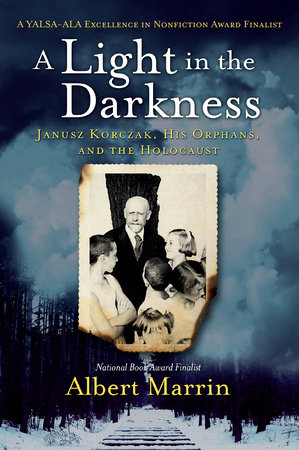 A Light in the Darkness By Albert Marrin

From National Book Award Finalist Albert Marrin comes the moving story of Janusz Korczak, the heroic Polish Jewish doctor who devoted his life to children, perishing with them in the Holocaust.

Janusz Korczak was more than a good doctor. He was a hero. The Dr. Spock of his day, he established orphanages run on his principle of honoring children and shared his ideas with the public in books and on the radio. He famously said that "children are not the people of tomorrow, but people today." Korczak was a man ahead of his time, whose work ultimately became the basis for the U.N. Declaration of the Rights of the Child.

Korczak was also a Polish Jew on the eve of World War II. He turned down multiple opportunities for escape, standing by the children in his orphanage as they became confined to the Warsaw Ghetto. Dressing them in their Sabbath finest, he led their march to the trains and ultimately perished with his children in Treblinka.

And throughout, Marrin draws readers into the Warsaw Ghetto. What it was like. How it was run. How Jews within and Poles without responded. Who worked to save lives and who tried to enrich themselves on other people's suffering. And how one man came to represent the conscience and the soul of humanity.

Filled with black-and-white photographs, this is an unforgettable portrait of a man whose compassion in even the darkest hours reminds us what is possible. 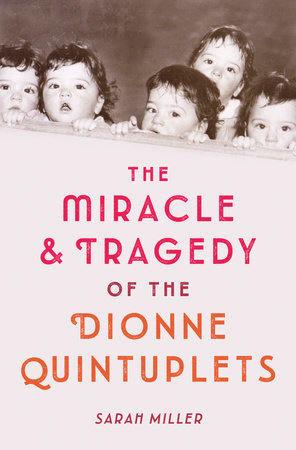 The Miracle & Tragedy of the Dionne Quintuplets By Sarah Miller

In this riveting, beyond-belief true story from the author of The Borden Murders, meet the five children who captivated the entire world.

When the Dionne Quintuplets were born on May 28, 1934, weighing a grand total of just over 13 pounds, no one expected them to live so much as an hour. Overnight, Yvonne, Annette, Cécile, Émilie, and Marie Dionne mesmerized the globe, defying medical history with every breath they took. In an effort to protect them from hucksters and showmen, the Ontario government took custody of the five identical babies, sequestering them in a private, custom-built hospital across the road from their family--and then, in a stunning act of hypocrisy, proceeded to exploit them for the next nine years. The Dionne Quintuplets became a more popular attraction than Niagara Falls, ogled through one-way screens by sightseers as they splashed in their wading pool at the center of a tourist hotspot known as Quintland. Here, Sarah Miller reconstructs their unprecedented upbringing with fresh depth and subtlety, bringing to new light their resilience and the indelible bond of their unique sisterhood.

The Far Away Brothers (Adapted for Young Adults) By Lauren Markham

The inspiring true story of identical twin teenage brothers who escape El Salvador's violence to build new lives in California as undocumented immigrants--perfect for fans of Enrique's Journey and anyone interested in learning about the issues that underlie today's conversations about DACA and immigration reform.

Ernesto and Raúl Flores are identical twins, used to being mistaken for each other. As seventeen-year-olds living in rural El Salvador, they are used to thinking that the United States is just a far-off dream. When Ernesto ends up on the wrong side of MS-13, one of El Salvador's brutal gangs, he flees the country for his own safety. Raúl, fearing that he will be mistaken for his brother, follows close behind.

Running from one danger to the next, the Flores twins make the harrowing journey north, only to fall into the hands of immigration authorities. When they finally make it to the custody of their older brother in Oakland, California, the difficulties don't end.

While navigating a new school in a new language, struggling to pay off their mounting coyote debt, and anxiously waiting for their day in immigration court, Raúl and Ernesto are also trying to lead normal teenage lives. With only each other for support, they begin the process of carving out a life for themselves, one full of hope and possibility.

Adapted for young adults from the award-winning adult edition, The Far Away Brothers is the inspiring true story of two teens making their way in America, a personal look at US immigration policy, and a powerful account of contemporary immigration.

In this very personal work--adapted from the original #1 bestseller, which the New York Times calls "as compelling as To Kill a Mockingbird, and in some ways more so"--renowned lawyer and social justice advocate Bryan Stevenson offers a glimpse into the lives of the wrongfully imprisoned and his efforts to fight for their freedom as the founder of the Equal Justice Initiative.

Stevenson's story is one of working to protect basic human rights for the most vulnerable people in American society--the poor, the wrongly convicted, and those whose lives have been marked by discrimination and marginalization. Through this adaptation, young people of today will find themselves called to action and compassion in the pursuit of justice.

A portion of the proceeds of this book will go to charity to help in Stevenson's important work to benefit the voiceless and the vulnerable as they attempt to navigate the broken U.S. justice system.

PRAISE FOR JUST MERCY: A TRUE STORY OF THE FIGHT FOR JUSTICE:
"It's really exciting that young people are getting a version tailored for them." --Salon

PRAISE FOR JUST MERCY: A STORY OF JUSTICE AND REDEMPTION:
"Gripping. . . . What hangs in the balance is nothing less than the soul of a great nation." --DESMOND TUTU, Nobel Peace Prize Laureate 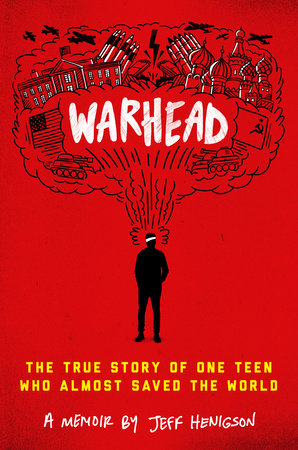 An often hilarious and always relevant memoir about one teen boy's battle with brain cancer and his Starlight Children's Foundation wish: to meet Mikhail Gorbachev in Russia and plead for nuclear disarmament and world peace.

It's 1986, and Jeff is an average fifteen-year-old: he thinks a lot about dating, he bounces around with his friends, and he's trying his hardest to get a car. Conversely, the world around him feels crazy: the United States and the Soviet Union are at glaring odds, with their leaders in a standoff, and that awful word, "nuclear," is on everyone's mind. Then, boom--Jeff learns that he has brain cancer and it's likely terminal. Well, that puts a damper on his summer plans and romantic prospects, doesn't it?

Jeff's family rallies around him, but they are fiercely complicated--especially Jeff's father, a man who can't say "I love you" even during the worst of Jeff's treatment. So when the Starlight Children's Foundation offers to grant Jeff a wish, he makes one certain to earn his father's respect: he asks to travel to Moscow and meet with Mikhail Gorbachev to discuss nuclear disarmament and ending the Cold War. Nothing like achieving world peace to impress a distant father, right? Jeff has always been one to aim high.

Jeff's story is dark, but it's also funny, romantic, and surprising. As his life swings from incredibly ordinary to absolutely incredible, he grapples with the big questions of mortality, war, love, hope, and miracles.

"A sweet but unsentimental account of a truly fascinating nuclear childhood. Henigson had me at 'Gorbachev.'" --Gary Shteyngart, New York Times bestselling author of Little Failure and Lake Success