December Teach-Alike: The Secret Horses of Briar Hill with The Secret Garden

Frances Hodgson Burnett’s The Secret Garden (1911) is a whimsical novel about friendship, overcoming trauma, and rejuvenation. The Secret Garden begins in India with a spoiled, unthankful family and transitions to Yorkshire, England. There, protagonist Mary Lennox—parentless and without a friend—finds herself awakened and eventually enlivened by her distant uncle’s locked garden and her newly discovered cousin. When a group of my students chose this text for their literary circle book, they found the subtle magical realism to be one of the most interesting aspects of the story as it helped shed light on the influence of hope and imagination.

Megan Shepherd’s The Secret Horses of Briar Hill is a wonderful companion text to Burnett’s classic. Shepherd writes an enchanting story set during World War II about Emmaline, a young girl who finds herself seeking adventure in the Briar Hill hospital alongside Foxfire, a magical white horse with a broken wing who has somehow entered her world and her heart. Like Mary Lennox and her garden, Emmaline sets out to transform the bland, gray world around her in hopes of saving her new friend and herself. With a touch of magic and a historical feel, The Secret Horses of Briar Hill is a beautiful story of friendship and courage. 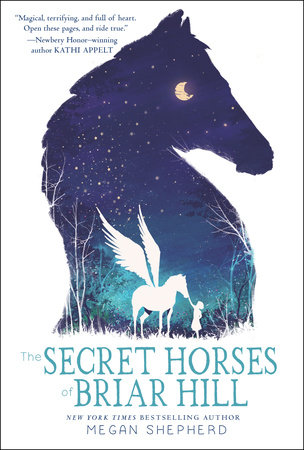 The Secret Horses of Briar Hill By Megan Shepherd

There are winged horses that live in the mirrors of Briar Hill hospital—the mirrors that reflect the elegant rooms once home to a princess, now filled with sick children. Only Emmaline can see the creatures. It is her secret. One morning, Emmaline climbs over the wall of the hospital’s abandoned gardens and discovers something incredible: the white horse with a broken wing has left the mirror-world and entered her own.

The horse, named Foxfire, is hiding from a dark and sinister force—the Black Horse who hunts by colorless moonlight. If Emmaline is to keep him from finding her new friend, she must surround Foxfire with treasures of brilliant shades. But where can Emmaline find color in a world of gray?

Praise for The Secret Horses of Briar Hill

★ “[A] moving, magically tinged slice of historical fiction.” —Booklist, Starred Review
★ “Emmaline’s narration is unreliable, flawlessly childlike, and deeply honest. The right readers will love this to pieces.” —Kirkus Reviews, Starred Review
★ “This exquisite, beautifully illustrated middle-grade novel explodes with raw anguish, magic and hope, and readers will clutch it to their chests and not want to let go.” —Shelf Awareness, Starred Review