Complex thoughts on a life spent being the short guy

And then, last year, I found myself writing a young-adult novel about a short boy frustrated with his height. I didn’t come up with the idea; the premise and prompt came from a colleague. It never would’ve occurred to me. I’d never written for a specific physical body. All the whiteguy heroes in my many previous, always-abandoned whiteguy desk-drawer novels were of some indeterminate, wholly irrelevant middle-height. They were just minds shambling along at mid-altitude. Pressed, I’d say I probably imagined them at 5’8, average-ish. Existentially small, maybe, but physically? That was magical-realism territory. No, my dudes were just mildly overeducated schmoes of median height in moderately amusing picaresques. Dwarfed by modern life, but not by, say, their girlfriends, or a lamp.

The point is, I even made my schmoes taller than I was. Never even noticed I was doing it, because I was so busy not-noticing how 5’4” I was.

And then, micro-tragedy struck: I lost a quarter of an inch.

I know people who could lose a quarter of an inch and not miss it. For these people — the lumpentall let’s call them — a mere 0.25 out of 72ish is like losing a day’s interest on a solidly diversified family-fortune. I’m not one of these people. Height-wise, I’m living hand-to-mouth and very close to the floor. The loss of that quarter-inch was meaningful. It threw my body-mass index into yellow-alert territory. It occasioned casual doctortalk of “vertebral telescoping,” which I didn’t fully understand but sounded like bad news for a man of 5’ 4”.

I never knew how much I had invested in 5’4”, psychologically and self-image-wise, until it was gone — and yes, that’s got to be the saddest riff on a Joni Mitchell lyric ever committed to print. (Joni Mitchell is 5’6”, by the way, a damned giantess.) 5’4” was my official, for-the-record, driver’s license-height for almost thirty years– and, it turned out, a lie, a structural lie, longitudinal. All it took was one cold shaddak! of the stadiometer, one metallic tap to the top of my head, for a nurse practitioner to bring me crashing down to earth. Shouldn’t have felt like much of a fall. But it did.

Spinal Telescopy Theory notwithstanding, the most likely explanation for the loss of my quarter-inch was that I’d never had it in the first place. 5’4”, turns out, hadn’t been my height but my goal-height, and I’d never reached it. Apparently, I’d been rounding up to the next inch since adolescence, and rounding-up-to-the-next-inch is so common among adolescent boys, they either forget they’ve done it or strike it from the hippocampal record entirely. 5’4” was an aspiration that got fossilized into actuality– only to be revealed, decades later, like an asymptote, a horizon I’d never meet.

I was finishing a book about a kid who grows from 4’11” to 7’2” while coming to terms with being 5’3” instead of 5’4”, and I had to ask myself, for the first time: What does Being Short mean? What if you really have to live in the body you’re dealt? Not just drive it like a rental?

“Short man” is not quite an identity. (Those standards are just too high, and the Twitter hours daunting.) Which leaves it stranded as mild insult, a rare 21st-century taboo. Today, we’re far more likely to grapple with “curvy women” than with tiny men. The latter is still a small tragedy. Napoleon Complex, short-man syndrome, what have you — these are things the lumpentall don’t like to talk about. They’re also things they’ve confirmation-biased into existence because they find the anger of small men (q.v. children) more annoying than threatening/authoritative, and they need intellectualize their annoyance into a rationale: They’re just compensating, poor things. Let them simmer down.

Short Man is not an insult, or a syndrome, or a complex, but it is a mood. A set of suspicions, really: I’m not being looked in the eye. I’m not being treated as an adult. I’m being talked to like a child, I’m being taught, constantly. Will/do women take me seriously/sexually? Science says we’re not angry little Pescis, but furtive hoarders. Science also offers something called Lateral Synovial Joint Loading, the intentional and strategic distressing of longbones to achieve extra length after maturation/fusion. Science sounds a little worried about us. Concerned, perhaps, that we’re going to shoot someone at a poker game or take Austerlitz in a sneak attack.

To me, none of this worry sounds super healthy. But it’s probably healthier and real-er than the blind retreat from my own flesh I embarked on for decades, a denial/decoupling/detachment so weightless it was practically an out of body experience.

At 5’3” in middle middle-age, life about 50% spent, spinal-telescoping imminent, height set to dwindle from here on out; I’ve got a decent shot at living in my body for the first time. Either because I’ve got more net-confidence to combat panic or less net-energy to spend on anxiety, I don’t feel the need to rise above. Becoming comfortable with less is the business of getting old, or should be. I’ve got a hell of a head start.

Scott Brown (5'4") is a prolific writer of nonfiction, theater, and television. As a journalist and arts critic, he's worked for EW, New York, Wired, GQ, and Time magazines, among others, and was the recipient of the George Jean Nathan Award for Dramatic Criticism. He is the co-author/composer of Gutenberg! The Musical! and a bookwriter on two developing Broadway-bound musicals (from Warner and Disney Theatricals). In television, he wrote for the critically acclaimed drama Manhattan, and he is currently a writer and producer on HBO's Sharp Objects, from the novel by Gillian Flynn.
Scott has never taken any herbal supplements, but he's also never read the ingredients on his Spindrifts very closely. Either way, it's unlikely he'll see 5'5". He lives in Western Massachusetts with his taller wife and growing family. Learn more about Scott on Twitter at @scottstagedive. 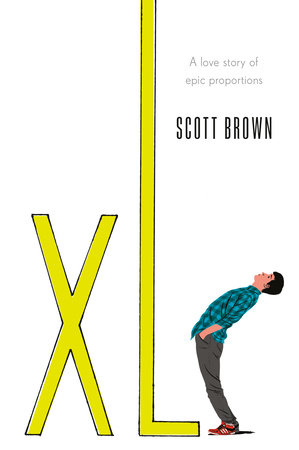 Fiercely funny, honest, and poignant, this story of a growth spurt gone wrong is perfect for readers who love Becky Albertalli and Jesse Andrews.

"XL is going to be huge! I loved Will Daughtry at every height. You will too." --Julie Buxbaum, bestselling author of Tell Me Three Things and What to Say Next

WIll Daughtry is a late bloomer--at least, that's what everyone tells him. On his sixteenth birthday, Will is just shy of five feet, and he is bitterly resigned to being tiny forever. His only comforts are his best friend and stepbrother, Drew (6'3"), and their pal Monica (5'10"), the girl Will's been quietly pining for since fifth grade. Everyone else literally overlooks him. But with them, he feels whole. That is, until things take an unexpected turn, and he realizes he's really and truly on his own.

That's when he starts to grow. And grow fast. Astonishingly fast. For the first time, Will's happy with his stature, and the world's at his feet (for a change). People see him differently; more important, he sees himself differently. But the highest heights come with some low, low lows, and his most precious relationships suffer excruciating growing pains. Will has to figure out what to do with himself--and all of this new "himself" he never expected to have.

"Outsized in heart and humanity, XL is destined to become a classic." --GILLIAN FLYNN, bestselling author of Gone Girl and Sharp Objects