Read an essay from Susin Nielsen, author of No Fixed Address

I got the idea for No Fixed Address in a dream.

No, really. It’s true. I was lying awake in a hotel room in Kelowna, BC, at four o’clock in the morning, as one sometimes does. And as I drifted back into sleep, I saw a boy living in a VW van with his mom. Luckily, unlike most of my dreams, I remembered this image in the morning, and I quickly wrote it down.

What I didn’t anticipate then, or when I started writing the book, is how the story would wind up being remarkably timely. Felix and his mom are forced, through a series of unfortunate circumstances, to live in a van. Even though neither of them uses the word, they are, essentially, homeless. In Vancouver, and in many other “world class” cities, more and more people and families have joined the ranks of what is aptly described as “the hidden homeless.” Those of us who’ve lived in Vancouver for many years (and who bought homes in the market when it was just expensive, but not yet insane) have watched with alarm as housing has increasingly become a privilege, not a basic human right. Real estate has turned into an investment scheme, a place for the wealthy from Canada and abroad to park their money and watch it grow. In Vancouver, smaller family homes are torn down at an alarming rate, replaced by large houses that often remain empty. Ditto in the condo market – new developments sell out, yet half the units stay unoccupied, while down on the streets below, the homeless population grows. There are fewer and fewer rental units, and what’s available is shockingly expensive. Young people are being pushed out of the city at an alarming rate. To say it’s a crisis is an understatement.

I would like to say that I knew No Fixed Address would be addressing this crisis when I wrote it, but that would not be entirely true. Yes, it was already a problem, but the problem has grown in leaps and bounds during and after the writing of this story. I quite honestly didn’t mean to write a book that would be so “of the moment.” But once the book was through copy-editing, a series of articles appeared in our national newspaper, about the increasing number of people in Vancouver who are living in—you guessed it—their vehicles: cars, vans, or camper vans, because they simply can’t afford to live anywhere else. I’ve seen the change with my own eyes; when I walk down to the beach, I see rows of camper vans parked in the lots, at all times of year, with clear signs of being lived in.

Now, all of that said, I also did not set out to write a screed. I always set out to write a good story, a well-paced story, with believable, flawed, yet hopefully understandable characters, and always with a lightness of touch, because my number one goal, always, is to write a book that kids will actually want to read. A book that will entertain them, and hopefully make them enjoy the act of reading. So, even though Felix’s story is heartbreaking in many ways, he is a resilient kid who doesn’t see himself as a victim. There is a lot of humor in the novel.

When I think about it more deeply, I realize that I’ve yet again drawn from elements of my own upbringing. My mom was nothing like Astrid, but she was a single parent; I was an only child. We didn’t have much money for extras. We lived in rental apartments; home ownership wasn’t even on the radar. We moved a number of times throughout my childhood, following my mom’s nursing jobs. But unlike Felix, my mom always provided for me; I always felt the ground was stable beneath my feet. I never worried about her mental well being (I suspect there were moments when she struggled, but she kept those moments well hidden from me), and I never had to worry about whether or not we’d have a roof over our heads.

Writing the novel was arduous, but reasonably smooth. Felix was a joy to write, a boy who loves his mother and wants to believe in her choices, even when it becomes increasingly difficult. Part of his journey is one that all children go through, the inevitable realization that your parents are fallible and far from perfect.

Astrid, too, was a joy to write. She is a frustrating, annoying person sometimes (and perhaps that’s what made her fun to explore). But I hope that as the book goes on, people’s hearts will go out to her, even if they want to simultaneously take her by the shoulders and shake her.  I take a certain pride in doing my best to create realistic adult characters, and Astrid resembles parts of various people I have known throughout my life. She is a damaged woman who is trying her best. And her best isn’t always good enough.

I also enjoy discovering my secondary characters. Dylan, Winnie, and the Ahmadis took some time to form fully in my vision, but when they did, I had so much fun writing them. Sometimes it’s the smallest things that allow you to tap more deeply into a character; in Dylan’s case, it was my realization, sometime during my first big edit, that he believed his family had a poltergeist. Suddenly I had a much clearer image of him. I suspect all writers have these moments of clarity. They are a joy when they happen.

Lastly, for some reason I have always wanted to have a game show in one of my books. Perhaps it’s my own years-long obsession with “Jeopardy” (never in a million years would I have been good enough to be a contestant). This was the story where it fit.

In spite of the rather heavy subject matter at the heart of the novel, it is a hopeful story. Felix, in choosing to believe in the goodness of people, stands a much better chance than his mom ever did. All of my books end on a message of hope. Even if I find it harder to feel hopeful in the real world these days, I still want that message in the books I read—and in the books I write. 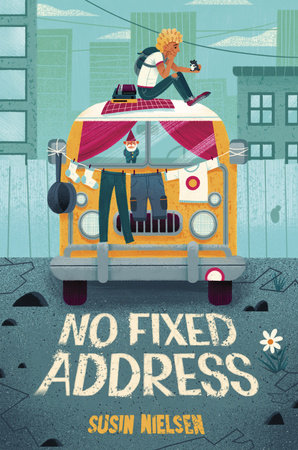 No Fixed Address By Susin Nielsen

Twelve-and-three-quarter-year-old Felix Knutsson has a knack for trivia. His favorite game show is Who What Where When; he even named his gerbil after the host. Felix’s mom, Astrid, is loving but can’t seem to hold on to a job. So when they get evicted from their latest shabby apartment, they have to move into a van. Astrid swears him to secrecy; he can’t tell anyone about their living arrangement, not even Dylan and Winnie, his best friends at his new school. If he does, she warns him, he’ll be taken away from her and put in foster care.

As their circumstances go from bad to worse, Felix gets a chance to audition for a junior edition of Who What Where When, and he’s determined to earn a spot on the show. Winning the cash prize could make everything okay again. But things don’t turn out the way he expects. . . .

Susin Nielsen combines humor, heartbreak, and hope in this moving story about people who slip through the cracks in society, and about the power of friendship and community to make a difference.