Q&A with Cath Crowley, Author of Words in Deep Blue 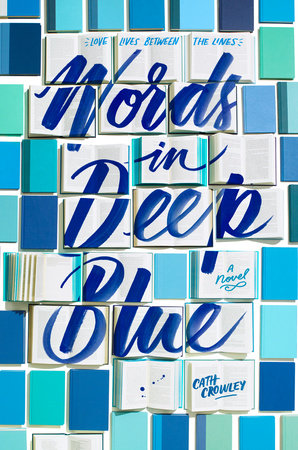 Award-winning author Cath Crowley’s newest book (out in June!) is a beautiful love story for fans of Jandy Nelson and Nicola Yoon about two teens who find their way back to each other in a bookstore full of secrets and crushes, grief and hope – and letters hidden between the pages.

Random House Children’s Books: Words in Deep Blue, coming out this summer, is your first book since Graffiti Moon, which is beloved by the librarian community. Why now? Was there something about Words in Deep Blue that compelled you to write the story?

Cath Crowley: It’s always hard to pinpoint, looking back, where the ideas came from. I know that I’m interested in the way we leave ourselves on our landscape or our world. I can see this in Graffiti Moon—characters painting themselves on walls. I think I wanted to take it one step further in Words in Deep Blue and look at how we leave ourselves on the things we love—how we change the things we love and how they change us.

Someone said to me in the early days of writing the novel that books are time travelers, and it’s true. We hear Dickens’s voice because he wrote. So that idea was playing into the writing process.

And there’s another memory of me, on a terrible day, standing in my kitchen, reading the last page of Looking for Alaska by John Green. There’s that last passage trying to explain the labyrinth of suffering. I can still remember the overwhelming sense of relief I felt after reading it—everything, I thought, is going to be okay. Books, words, ideas—they change people. They’ve changed me greatly. I wanted to write about people being changed by the written word.

RHCB: I think a lot of people will be changed by your written words in Words in Deep Blue. Will you delve into what the story is about for those who might be unfamiliar?

CC: Words in Deep Blue is a love story set in a secondhand bookshop. There’s a Letter Library up the back of the shop – a set of books that people can write on, can mark and circle, to leave parts of themselves on the books that have changed them. Ruth Gamble, a woman I interviewed as part of my research for the book, thought there was an ‘archaeology of soul’ in a bookshop, and this is how I see the letter library – a catalogue of people.

On one level Words in Deep Blue is a standard love story – Rachel has fallen for her best friend, Henry, so it’s about how we deal complications in relationships and find our way back to friendship. But it’s also about the love we have for words, and how those words show us who we are. It’s about the love people can have for their pasts – how they long to revisit and relive. Most importantly for me, it’s about how we find a way back to life after grief, which is a death for the living, I think.

RHCB: While the book is a story about grief and love, it is also a bit of a mystery. Will you talk about that?

CC: While I was writing Words in Deep Blue, I kept thinking about time: how we’re trapped in it, by it. It makes sense that I was thinking about it—Rachel is looking back, feeling Cal as both present and absent. I became interested in the theory of time (I’m paraphrasing badly) that states that the past is as real as the present. I didn’t understand it in a scientific sense, but I liked the poetry of it. It got me thinking about all the mysteries there are in the world. Some of the saddest ones relate to grief. How can someone just disappear? How can we feel them as ghosts when ghosts don’t, according to science, exist? How do we come back from something as terrible as the loss of a loved one? There are so many mysteries surrounding grief; it seemed right to have a mystery running through the heart of the novel.

RHCB: The letter library in Howling Books, the bookstore in which Words in Deep Blue is partially set, is such a creative idea. How did you come up with it?

CC: I can’t pinpoint the exact moment when the idea arrived. The first scene I wrote, which was discarded in the end, was of Henry’s dad sitting on the veranda. He was writing to Pablo Neruda about love without an address for his letter.

A while after that, I opened a copy of A Streetcar Named Desire to see that a stranger had underlined the same phrases that I love. Of course you see this often, but the markings always feel like notes taken in a class, as if they had been directed by a teacher. These underlines in Streetcar felt like a person marking them out of love or need.

I thought about a whole bookstore where people were allowed to write in the books, but that seemed impracticable, and so it became a set of shelves in the store, a letter library: a place where people could write to strangers, to poets, to people they’d lost.

RHCB: What was the most challenging part of writing Words in Deep Blue?

CC: Rachel was incredibly difficult to write. I didn’t trust that I’d captured her grief. I couldn’t comprehend a loss of that scale, so I didn’t understand how there could be any lightness in her voice.

Then at the end of the third draft, my father passed away. It made writing Rachel difficult in a different way. I was dwelling on the small things too much in order to capture them on the page. But it made me see that grief is particular to each person, and for me, there could be moments of humor. I met my future husband almost a year after Dad died, and so Rachel falling back in love with Henry felt possible. I could also see how a person who doesn’t believe in ghosts could entertain the thought that they exist. I understood how you could simultaneously believe and disbelieve.

RHCB: Words in Deep Blue seems like such a personal book. What made you decide to write about grief?

CC: My father was sick, briefly, long before the second illness that took him. And although I didn’t know it consciously, I think I had begun to worry about a time when he would be gone. What would that feel like? Where would he go? I know for certain that I read a poem by Philip Larkin, “Aubade,” and when I read the line about sure extinction I couldn’t get it out of my head.

RHCB: What kind of research went into writing this book?

RHCB: What do you hope readers take away from Words in Deep Blue?

CC: I’ve had so many beautiful letters arrive since I wrote the book. And in them, the message is constant: despite grief and death, life continues. The most beautiful message I’ve had was a photograph of some calligraphy the reader had drawn.