October Teach-Alike: a graphic-novel and a hero’s journey 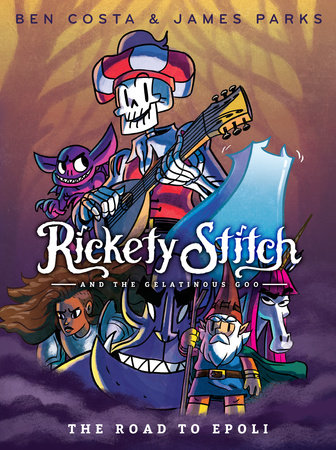 What do a skeleton named Rickety Stitch and scholar Joseph Campbell have in common?

“Hero’s journey” refers to the structure of a broad category of tales that involve a hero who goes on an adventure, is involved in a crisis, is helped by allies, wins a victory, and then comes home changed or transformed. Joseph Campbell, an American mythological researcher and author of The Hero with a Thousand Faces, coined the term after studying Swiss psychoanalyst Carl Jung’s writing on the myth template.

In classrooms today, students learn about the hero’s journey through a variety of texts, including classic and contemporary novels, poetry, and films. Homer’s The Odyssey is one of the best-known examples, but there are others that may be somewhat surprising. For example, Simba in Disney’s The Lion King and Katniss Everdeen in the Hunger Games. Yann Martel’s Life of Pi? That’s a hero’s journey. George Lucas had written two drafts of Star Wars when he rediscovered Campbell’s notes. He was then able to successfully finish the film. Even William Goldman’s The Princess Bride is a wonderful example of the outline.

So what does a skeleton named Rickety Stitch have to do with Homer and Simba? James Parks and Ben Costa have created an incredible graphic-novel series about a man (skeleton) on a quest to discover his identity and share his story. Graphic novels are gaining popularity because of their accessibility and the engagement they inspire, and because the format often makes digesting complex topics—like the stages of the hero’s journey—a little easier. Rickety Stitch and the Gelatinous Goo Book 1: The Road to Epoli is a perfect companion text for students studying the myth template and learning that the hero of a story can be almost anyone: a lion warrior, a teenage girl standing up for her family and community, or a skeleton looking for his identity.

Classroom Lesson: While reading The Odyssey, have students simultaneously read Rickety Stitch and the Gelatinous Goo Book 1: The Road to Epoli. Discuss the elements of the cycle in both texts, and analyze similarities, differences, and the overall effect on the texts. Then have students find a modern-day story that fits the archetype of a hero’s journey. (They should consider heroes from literature, movies, newspapers, magazines, and comics.)

Praise for Rickety Stitch and the Gelatinous Goo Part 1: The Road to Epoli

★ “Don’t be fooled by the cheery illustrations; this is irreverent, bawdy, and lots of fun.” —Kirkus Reviews, Starred Review

★ “The art brings the story to life, making the characters believable and adding dimension to personalities. The plot is an exciting blend of creepy and humorous, with a truly amazing amount of world-building and history, making the setting every bit as captivating as the characters.” —School Library Journal, Starred Review

★ “There is lots of intertextual cleverness going on that results in this book being both an homage to and spoof of the traditional fantasy hero’s quest, both in the illustrations and in the narration.” —The Bulletin, Starred Review