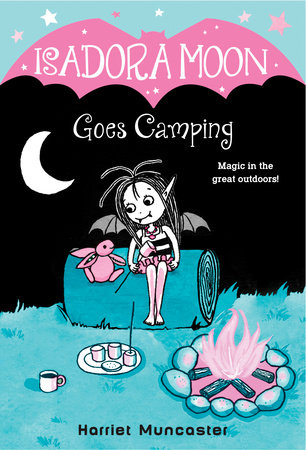 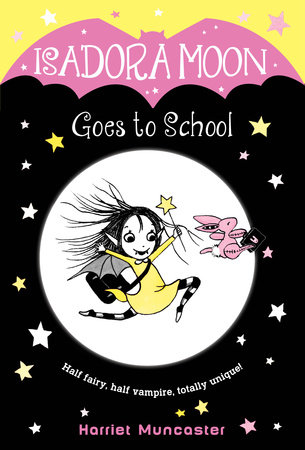 Isadora Moon is a character who was actually a long time in the making although I didn’t know it at the time! When I was eighteen and on my art foundation course I created a character called Victoria Stitch who was a mean, spiky looking adult fairy. I poured a lot of passion into Victoria Stitch and from then on she became a sort of alter ego for me. She had messy black hair and bat wings and a little stitched pink rabbit who she dragged everywhere with her. Whilst on my foundation course and then my degree, I illustrated two (unpublished) books about her. Over that time she evolved as my illustration style evolved until I got to a point where I was drawing her in only black and pink. I really liked the aesthetic of this but whenever I showed Victoria Stitch to publishers I was always told that she was too mean, adult and spiky for a children’s picture book. At the time I didn’t understand but after having a baby myself I now do understand. I believe it is so important to introduce children to good role models – not like Victoria Stich who is a character with no redemption. However, I really liked the aesthetic of my Victoria Stitch pictures, the gothic vibe juxtaposed against the candyfloss pink, so I decided to create something with the same look to it but more accessible for children. I started by drawing a friendlier version of Victoria Stitch as a little girl. I gave her messy hair and bat wings and a pink rabbit toy. I added fangs just to try them out but then I loved them because I thought they looked so cute! I decide to keep the fangs and that got me thinking about what kind of character would have fangs and wings at the same time? It became obvious to me then that this little girl was half vampire, half fairy. After that the world fell into place easily.  I decided that in an unlikely pairing, Isadora’s mum would be a fairy and her dad would be a vampire. Two very different worlds would collide. The darker, gothic vampire world and the sunshiney, pink fairy world. I loved the contrast and it gave me a lot of scope for story ideas. By this point Isadora Moon had become very much a character in her own right, completely separate from Victoria Stitch but with the same aesthetic. The only thing that stayed constant was Pink Rabbit. Victoria Stitch was annoyed to lose him but he has a much nicer life now with the friendlier and kinder Isadora Moon! HARRIET MUNCASTER is the author/illustrator of the picture books I Am a Witch's Cat and Happy Halloween, Witch's Cat! She holds two degrees in illustration and has lived on the same hill in Hertfordshire, England, for as long as she can remember. Isadora Moon is her first chapter book series.