“Ghosts and Dragons”: An Essay by R. M. Romero 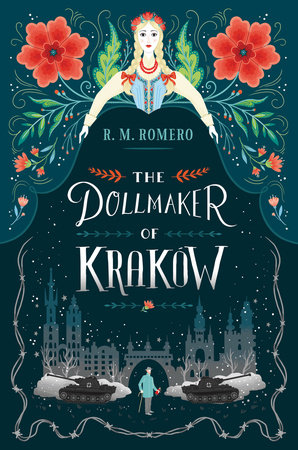 As a teenager, I felt compelled to visit Poland. This may sound odd—how much did I even know about Poland? I’m not Polish—but I decided I wanted to see the city of Kraków, and I felt I also needed to go to the Auschwitz-Birkenau concentration camp.

I was met with a chorus of disbelief whenever I discussed my plans with friends and family. No one understood why I wanted to travel to places that felt remote and strange to most Westerners. The comments ranged from:

“What if you get lost? You don’t speak Polish.”

“A concentration camp is so depressing! Is that really how you want to spend your time?” to

“Aren’t you scared to be by yourself in a big city? You’re a girl.”

And I was able to answer, with no doubts in my mind, I am not afraid. The thousand disasters that could have befallen me in a foreign country where few people spoke English never occurred to me. My youth armed me with a kind of fierceness.

But even if I had been scared, I still would have gone. I couldn’t explain it, but I had to.

I spent three days in the town of Oświęcim, where the Auschwitz-Birkenau complex is located.

Every night when I returned to my youth hostel, I paced around my room, thinking about what I had seen during the day. I tried to understand how people could have done such things to one another . . . only to realize that I never really could. How can that depth of evil be explained? It cannot.

From Auschwitz, I went to Kraków. On the train, I was finally able to cry and release all the overwhelming feelings inside me.

When I reached the city, I sent my parents an email so they would know I was safe. Then I sent another, more honest email to my best friend. “I don’t know how to talk about what I saw there,” I told her. “I don’t think I can ever go back.”

Eleven years later, I did return, as a part of a volunteer group assisting in the maintenance of a local Jewish cemetery. Once again, I felt it was something I needed to do.

Today, more people than ever go to Auschwitz to educate themselves, to mourn the loss of their people and their loved ones, and to bear witness. I imagine that, like I did, they feel that they must go, however difficult it is to be there.

I fell in love with the city of Kraków on my first trip, and my feelings have remained constant since.

Years and regime changes have barely altered the dawn-pink facades of the buildings in the main square. The Wawel Castle, which has been the home of kings, tyrants, and—supposedly—a dragon that was slain by the city’s legendary founder, is standing strong. Planty Park encircles what is left of the medieval city’s walls like an emerald ring. You can buy apples, braided bread rings (obwarzanek krakowski), and giant sunflower heads from stalls in every neighborhood, just as you could a century ago.

It is a city that remains full of dragons and ghosts.

However, in one sense, the real Kraków is not wholly untouched by time. Returning to the city as an adult, I was struck by the small differences.

I recognized on my second trip that Jewish life was more visible than a decade earlier; there is even a Jewish Community Center in Kazimierz, the district where the majority of Kraków’s Jewish residents lived for five hundred years. Many locals speak English. The factory that belonged to Oskar Schindler, the German businessman who saved the lives of more than a thousand Jewish Poles and was made famous in Steven Spielberg’s film Schindler’s List, is no longer a crumbling relic; it is a museum. And at the train station where the Jews and non-Jews who were targeted for death departed for concentration camps, there is a glossy shopping mall. But there are still dragons on every postcard and hidden in every painting.

And there are still ghosts around every corner.

It took me nine years to find the right words to describe the beauty of Kraków and the horror of Auschwitz. Those words came to me in an unexpected way, when, in my imagination and then on paper, I wrote a conversation between a spirited talking doll and the gentle man who had made her.

Some stories demand to be told; for me, this was one of them. It became The Dollmaker of Kraków.

Learn more about author R. M. Romero by visiting her at rmromero.com.