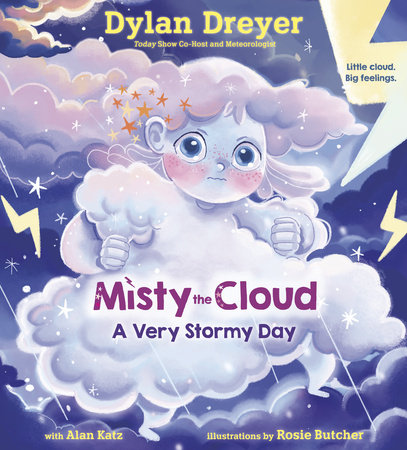 Hear from the collaborators behind Misty the Cloud: A Very Stormy Day

Dylan: Mr. and Mrs. Happyman-Thirstyburger. That’s the first thing that came to mind when my husband, Brian, and I looked at our two suitcases sitting at the airport, mine with a bow and his without. We daydreamed about this dynamic duo traveling the world together and the children’s book it could become. But once we were on board our plane, flying above the clouds, we quickly realized that I know a little bit about traveling the world, but I know a whole lot more about clouds and weather . . . I am a meteorologist, after all. After that, all we could think about was this world we could create in the sky: childlike clouds full of emotions and feelings, excitement and fun. The more we thought about it, the more we realized how much weather affects our own feelings. It snowballed (ha!), and we came up with story idea after story idea about these clouds in the sky and how we could tie them into the world of kids, and how kids could understand and relate to them. We were so into it, we commissioned some artwork and Ollie was born. Wait . . . who’s Ollie? Ollie is now our second child, but it was also one of literally hundreds of names we came up with for this sky-high series. Now we know her as Misty the Cloud.

While this idea was all we could think about, getting someone else on board with the idea was harder than I thought. As this pitch was coming from me (a female meteorologist), I was often told I should come up with an idea about a little girl who wants to become a meteorologist, a strong-headed girl who wouldn’t take no for an answer. So I did just that . . . I didn’t take no for an answer. I teamed up with the witty and kind (and experienced) children’s book author Alan Katz. We became a perfect team, and we each used our individual knowledge to bring Misty the Cloud and her world of Horizon to life. Combining my talents with Alan’s was a match made in the clouds. But I wonder what he thought about it . . .

Alan: I’m not sure I’ve told Dylan this story, but when I was in kindergarten, I played a cloud in the class play. Dressed head to toe in white, I proudly proclaimed, “Hello, friends, I’m a cirrus cloud.” (I probably pronounced it “serious.”) Little did I know my stellar performance would serve as research for a truly special project.

I’m proud to be the father of four incredible kids, and I’ve borrowed liberally from their real-life exploits to create more than fifty lighthearted, humorous books for young readers. But creating Misty the Cloud has been a whole different experience; Dylan and Brian’s characters—indeed, their world—have led me to a new form of creative expression.

From day one, this collaboration has been an absolute joy; I’ve written books and TV scripts with others before, but Dylan’s true sense of give-and-take has allowed us to weave a story that melds real feelings, real science, and a really engaging sense of humor. Misty and her friends are clouds, but their actions and emotions are childlike and genuine. I’m very excited to be part of a book series that will help that kids learn a lot about the weather (I definitely did!) and a lot more about themselves (I did that, too!). There were plenty of laughs during the creative process, and I’m so glad many of them made their way onto the pages, which were so wonderfully illustrated by another collaborator, Rosie Butcher.

And as Misty the Cloud: A Very Stormy Day is released into the world, one thing is abundantly clear: Dylan Dreyer is now a children’s book author, and I am still not a meteorologist.

Dylan Dreyer is a meteorologist for NBC News, a co-host of the 3rd Hour of Today, and the host of Earth Odyssey with Dylan Dreyer. She's covered hurricanes with 130 mph winds, but she loves a nice breeze when she walks her dog, Bosco. She's stood out in six-foot snowstorms (which is taller than her!), but she loves to go sledding with her sons, Calvin and Oliver. She's watched roads turn into rivers during strong thunderstorms, but she loves to splash in puddles. She's traveled the country (and has been to 49 states!) and the world...she's even been to the North Pole! She loves the weather and thinks the world is a fascinating place. She lives in New York City with her husband, Brian; their sons, Calvin and Oliver; and their dog, Bosco. Find her on Instagram and Twitter at @DylanDreyerNBC.

Rosie Butcher has illustrated many projects, including Cat Deeley’s The Joy in You and Vanessa Bayer’s How Do You Care for a Very Sick Bear? Rosie lives in England. You can visit her online at @scrimmle.