Digging Around: The Private Lives of Writers

An essay from Emma Carroll

It’s a side of being an author that comes with the territory: personal stuff, I mean—your story, your inspiration, things about you that make readers prick up their ears.  Yet in 1818, when Frankenstein was published, Mary Shelley did so anonymously. As the foreword was written by Percy Bysshe Shelley, the most common assumption was that he’d also written the book. It was a powerful, violent, clever story, so it had to be the work of a man—right?

Mary Shelley had reasons to keep quiet. In 1818, novels written by women weren’t considered serious literature. They were sensational, giddy, silly, and Shelley, in her short life to date, had already attracted notoriety in some quarters. She was the well-known child of political activist parents. Her mother had died of puerperal fever days after her birth, she’d had numerous spats with her father and eloped with the still-married Percy Shelley to Europe at the age of 16. She moved in the same circles as Lord Byron.

For me, what we know, what we think we know, and what we cannot know, are the things that make the book, and Shelley, so fascinating. Frankenstein, through its characters, its setting, its use of the gothic genre, tells us plenty about Shelley’s state of mind as she wrote it. And that academics, critics, readers have interpreted her message so differently over the years, for me, makes it all the more intriguing.

Anyone who’s signed a book deal will have filled in the publisher’s questionnaire, which asks among other things if you have an interesting backstory to share.

In my case I left that box blank. Being English, I couldn’t imagine anything I’d ever done possibly being of interest. And the one thing that might’ve stirred up mild curiosity involved body parts a children’s author surely wouldn’t want to discuss.

Yet in Strange Star, I’m more than happy to root around behind closed doors at the Villa Diodati, on that infamous June night in 1816 when Byron, Mary Godwin, Percy Shelley, John Polidori and Claire Clairmont challenged each other to tell ghost stories. Our fascination with writers’ private lives is hardly new. Shakespeare, with his bad handwriting and dead children, was the bequeather of second-best beds, the Brontes, makers of tiny, elf-sized books. Dickens’ childhood home was the debtor’s prison. Edgar Allan Poe’s days ended in the gutter, with him ranting and wearing a stranger’s clothes. On meeting Sylvia Plath, Ted Hughes stole her hairband—she bit his cheek in return. And what of the Harry Potter backstory—JK plotting out the whole series on a train journey, the single mum, toddler in tow, writing in cafes.

Back to Strange Star: yes, I trawled biographies and websites for histories of the era. Yes, I researched Mary Shelley’s backstory—and it is an intriguing one. I’d already studied the book from an academic perspective as part of my English Literature degree, and taught it to students during my 18 years as a high school teacher. In short, I knew the book pretty well—inside out, in fact.

What I was drawn to more and more were the bits I didn’t know. We can’t tell what exactly happened on that night in 1816. There are accounts, of course—Shelley’s own amongst them, which she altered over the years—and Polidori’s version of events which is different again. You’d expect it to be: history such as this—personal, domestic history—is subjective. Of those five people in the room that night, it’s human nature that they’d remember different things.

As a writer nothing delights me more than the gaps that only our imaginations can fill, which is what I’ve tried to do with Strange Star.  Yes, I’ve used real history, but only as a starting point. This is fiction, remember. What I wanted to do most of all was tell a story.

I don’t suppose there’s any getting from it, though: the stories behind our stories are intriguing. Who we are shapes what we write. In the end, yes, I did talk about my body parts for a piece in The Guardian. People read it and I didn’t die of shame. Maybe it’s okay to reveal personal things, particularly if it helps others in some way. Or maybe it’s just that people who write books are interesting—not that I’d include myself in that, of course, being English!

Emma Carroll is a high school English teacher. She has also worked as a reporter, an avocado picker, and the person who punches holes into Filofax paper. She recently graduated with distinction from Bath Spa University with an MA in Writing For Young People. She lives in the Somerset hills of southwest England with her husband and two terriers.
To learn more about Emma and her books, visit emmacarrollauthor.wordpress.com, follow @emmac2603 on Twitter, and look for Strange Star, her newest novel also available from Delacorte Press. 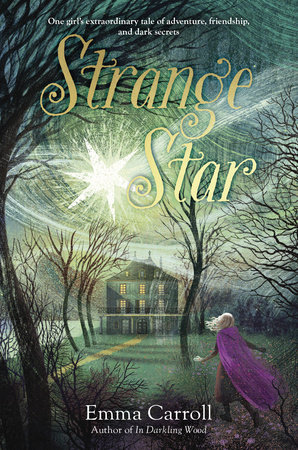 One stormy June evening, five friends meet at Villa Diodati, the summer home of Lord Byron. After dinner is served, they challenge each other to tell ghost stories that will freeze the blood. But one of the guests—Mary Shelley—is stuck for a story to share.

Then there’s an unexpected knock at the front door. Collapsed on the doorstep is a girl with strange scars on her face. She has traveled a long way with her own tale to tell, and now they all must listen.

Hers is no ordinary ghost story, though. What starts as a simple tale of village life soon turns to tragedy and the darkest, most dangerous of secrets. Sometimes the truth is far more terrifying than fiction . . . and the consequences are even more devastating.