Be Proud with these LGBTQA+ books for readers of every age! 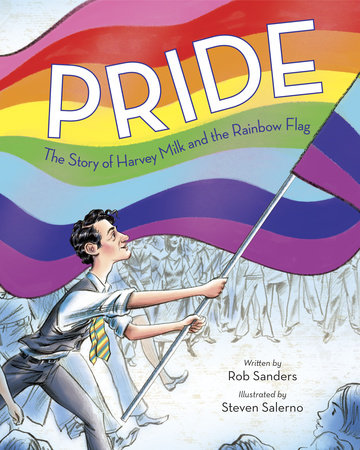 Pride: The Story of Harvey Milk and the Rainbow Flag By Rob Sanders; illustrated by Steven Salerno

The very first picture book about the remarkable and inspiring story of the Gay Pride Flag!

In this deeply moving and empowering true story, young readers will trace the life of the Gay Pride Flag, from its beginnings in 1978 with social activist Harvey Milk and designer Gilbert Baker to its spanning of the globe and its role in today’s world. Award-winning author Rob Sanders’ stirring text and acclaimed illustrator Steven Salerno’s evocative images combine to tell this remarkable—and undertold—story. A story of love, hope, equality, and pride. 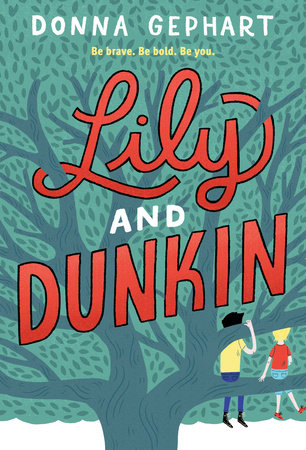 Lily and Dunkin By Donna Gephart

Award-winning author Donna Gephart crafts a compelling dual narrative about two remarkable young people: Lily, a transgender girl, and Dunkin, a boy dealing with bipolar disorder. Their powerful story will shred your heart, then stitch it back together with kindness, humor, bravery, and love.

Lily Jo McGrother, born Timothy McGrother, is a girl. But being a girl is not so easy when you look like a boy. Especially when you’re in the eighth grade.

Dunkin Dorfman, birth name Norbert Dorfman, is dealing with bipolar disorder and has just moved from the New Jersey town he’s called home for the past thirteen years. This would be hard enough, but the fact that he is also hiding from a painful secret makes it even worse.

Jazz Jennings is one of the youngest and most prominent voices in the national discussion about gender identity. At the age of five, Jazz transitioned to life as a girl, with the support of her parents. A year later, her parents allowed her to share her incredible journey in her first Barbara Walters interview, aired at a time when the public was much less knowledgeable or accepting of the transgender community. This groundbreaking interview was followed over the years by other high-profile interviews, a documentary, the launch of her YouTube channel, a picture book, and her own reality TV series–I Am Jazz–making her one of the most recognizable activists for transgender teens, children, and adults.

In her remarkable memoir, Jazz reflects on these very public experiences and how they have helped shape the mainstream attitude toward the transgender community. But it hasn’t all been easy. Jazz has faced many challenges, bullying, discrimination, and rejection, yet she perseveres as she educates others about her life as a transgender teen. Discover Jazz’s story in her words. 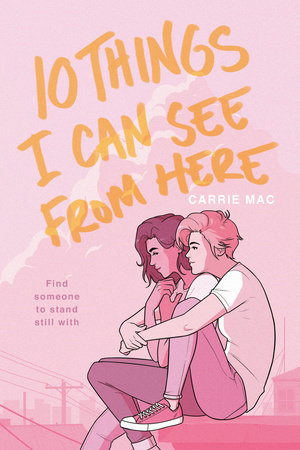 10 Things I Can See From Here By Carrie Mac

Maeve has heard it all before. She’s been struggling with severe anxiety for a long time, and as much as she wishes it was something she could just talk herself out of, it’s not. She constantly imagines the worst, composes obituaries in her head, and is always ready for things to fall apart. To add to her troubles, her mom—the only one who really gets what Maeve goes through—is leaving for six months, so Maeve will be sent to live with her dad in Vancouver.

Vancouver brings a slew of new worries, but Maeve finds brief moments of calm (as well as even more worries) with Salix, a local girl who doesn’t seem to worry about anything. Between her dad’s wavering sobriety, her very pregnant stepmom insisting on a home birth, and her bumbling courtship with Salix, this summer brings more catastrophes than even Maeve could have foreseen. Will she be able to navigate through all the chaos to be there for the people she loves?

Based on true events—and narrated by a Greek Chorus of the generation of gay men lost to AIDS—Two Boys Kissing follows Harry and Craig, two seventeen-year-olds who are about to take part in a 32-hour marathon of kissing to set a new Guinness World Record. While the two increasingly dehydrated and sleep-deprived boys are locking lips, they become a focal point in the lives of other teens dealing with universal questions of love, identity, and belonging.

From Rob Sanders, author of Pride: The Story of Harvey Milk and the Rainbow Flag, please find below some useful resources to use in your classroom or library.  Learn more about Rob and his work at his website: www.robsanderswrites.com.

AN OVERVIEW OF LGBTQ+ HISTORY

August 7, 1915—First lecture on homosexuality given in the USA by Emma Goldman.

December 1924—The Society for Human Rights is formed. It is the first gay rights organization in the USA.

1936—Nazis began rounding up homosexual men and sending them to concentration camps. Later some lesbians were also imprisoned. Homosexual men were marked with upside down pink triangles, lesbians with black triangles.

January 1948—The Kinsey Report by Alfred Kinsey is published.

November 11, 1950—Harry Hay and others formed the Mattachine Society.

1951—The Homosexual in America by Donald Webster Cory is published.

October 1956—The first issue of The Ladder is released by the Daughters of Bilitis.

October 8, 1968—Troy Perry held the first service in what would become the Metropolitan Community Church (MCC).

December 1969—The Gay Activist Alliance (GAA) is formed. In 1970, GAA secured its own building in SOHO, New York City, NY.

June 28, 1970—The Christopher Street Liberation Day march (precursor to Pride Marches to honor and remember the Stonewall Uprising) is held.

May 18, 1970—Jack Baker and Mike McConnell applied for a marriage license in Minneapolis, MN. It was the first challenge to same-sex marriage laws. They were denied.

1971—McConnell changed his name to Pat Lynn McConnell. A license was issued thinking McConnell was female. They were married, becoming the first same-sex couple married in the USA. The state of Minnesota chose to ignore the marriage rather than fight it.

March 11, 1973—The first meeting of what would become PFLAG (Parents, Families, and Friends of Lesbians and Gays).

December 1973—The leadership of the American Psychiatric Association (APA) voted unanimously to remove homosexuality from the organization’s list of disorders.

April 1, 1974—Ann Arbor, MI citizens elected Kathy Kozachenko to the city council. She was the first openly gay person elected to public office in the USA.

1974—Voters in Massachusetts sent Elaine Noble to the state senate. She was the first openly gay person elected to statewide office.

March 26, 1977—Members of President Jimmy Carter’s administration met with a delegation of gays and lesbians. This was the first such meeting ever in the White House.

November 8, 1977—Harvey Milk was elected to the San Francisco Board of Supervisors.

June 25, 1978—The Rainbow or Pride Flag, designed by Gilbert Baker, flew for the first time in the San Francisco Gay Freedom Day Parade.

November 1978—Proposition 6 was defeated in California.

October 14, 1979—The first National March on Washington for Lesbian and Gay Rights.

July 3, 1981—A story appeared in the New York Times about a rare cancer found in homosexual men.

1982—Wisconsin was the first state to pass a law banning lesbian and gay discrimination.

November 27, 1985—Cleve Jones had the idea for a quilt to remember those who died of AIDS.

June 30, 1986—In Bowers vs. Hardwick, the U.S. Supreme Court ruled lesbians and gays had no constitutional rights in their private, personal lives.

October 11, 1983—The NAMES Quilt was displayed on the National Mall for the first time.

September 21, 1996—The Defense of Marriage Act (DOMA) was passed and then was signed by President Bill Clinton. It defined marriage as being between a man and woman. States followed with their own DOMA laws.

October 12, 1998—Matthew Shepard was murdered. His was one victim of a growing number of hate crimes against members of the LGBTQ community.

November 18, 2003—The Massachusetts Supreme Judicial Court ruled that gay and lesbian couples should have the right to marry.

February 12, 2004—After a ruling by San Francisco mayor Gavin Newsom, Phyllis Lyon and Del Martin received the first same-sex marriage license in California and were married. Others followed. Twenty-nine days later, a judge ruled that marriages across the state be halted.

May 15, 2008—The California Supreme Court ruled the state’s ban on same-sex marriages was unconstitutional.

November 2008—Prop 8 passed in California. Same-sex marriages were halted and the rights of same-sex married couples were taken away.

Spring 2009—John Berry, an openly-gay man, was appointed by President Barack Obama as director of the Office of Personnel Management.

April 2009—Vermont legislators passed a marriage equality bill. That state was followed by Connecticut, New Hampshire, and the District of Columbia.

March 27, 2013—The Supreme Court of the United States heard Edith Windsor’s case against the Defense of Marriage Act.

June 26, 2013—The Supreme Court of the United States struck down the Defense of Marriage Act. Two days later, marriages resumed in California.

September 27, 2013—New Jersey was the first state where the ban on same-sex marriage fell. Other states followed.

June 26, 2015—The Supreme Court of the United States ruled that same-sex couples have the right to be married.

June 30, 2016— Under President Barack Obama, the ban on transgender service in the military is lifted.

July 27, 2017—Under President Donald Trump, the Justice Department declared that the Civil Rights Act of 1964 does not protect workers on the basis of sexual orientation.

May 17—International Day Against Homophobia, Transphobia, and Biphobia: A Worldwide Celebration of Sexual and Gender Diversity

SOME CHILDREN’S BOOKS WITH LGBTQ+ THEMES

AND OTHER RESOURCES FOR TEACHERS

A Name on the Quilt: A Story of Remembrance

This Day in June

Pride: The Story of Harvey Milk and the Rainbow Flag

Stonewall: A Building. An Uprising. A Revolution

When You Look Out the Window: How Phyllis Lyon and Del Martin Built a Community

The Adventures of Honey & Leon

By Justin Richardson and Peter Parnell

By Justin Richardson and Peter Parnell

By Adam Reynolds and Chaz Harris

Daddy, Papa, and Me

The Great Big Book of Families

In Our Mothers’ House

Mommy, Mama, and Me

A Tale of Two Daddies

A Tale of Two Mommies

By Stacy B. Davids

Are You a Boy or Are You a Girl?

By Jessica Herthel and Jazz Jennings

By Sarah and Ian Hoffman

Morris Micklewhite and the Tangerine Dress

My Princess Boy: A Mom’s Story About a Young Boy Who Loves to Dress Up

Oliver Button Is a Sissy

Who Are You? The Kid’s Guide to Gender Identity

Be Who You Are

The Boy Who Cried Fabulous

The Boy with Pink Hair

It’s Okay to Be Different

Julián Is a Mermaid

A Peacock Among Pigeons

Pink Is for Boys

Tell Me About Sex, Grandma

Living Peacefully with Others

Here We Are: Notes for Living on Planet Earth

Peace Is an Offering

Feminism from A to Z

The Little Book of Little Activists

The Rooster Who Would Not Be Quiet!

Other Resources for Teachers

Growing Up LGBT in America

“LGBT+ 101: An Introduction to the Queer Community”

The 2015 National School Climate Survey: The Experiences of Lesbian, Gay, Bisexual, Transgender, and Queer Youth in Our Nation’s Schools

“The Windows and Mirrors of Your Child’s Bookshelf” (TEDx Talk)