A Letter from Ross Welford, author of Time Traveling with a Hamster 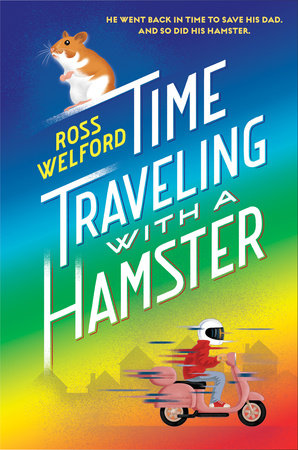 The idea for Time Traveling with a Hamster started with a what-if.

What if you could go back in time and meet your father as a child?

Everything else grew out of that central question.

On his twelfth birthday, Al receives a letter from his dead father telling him where to find the time machine that he had been secretly building. There is also a plea: use the time machine to go back to 1984 and prevent the accident that will cause his father’s death twenty-six years later.

As Al struggles to live up to his dad’s expectations, his adventures (on which he is accompanied by his pet hamster) bring him into conflict with everyone around him—especially his much-loved Grandpa Byron, an Anglo Indian hippie with a purple moped and a super powerful memory.

Making the science behind the time travel accessible was a challenge, but it was not the hardest thing about writing the book, nor was creating the happy ending that I felt Al deserved. The biggest challenge was getting the emotional tone of the story right.

On a recent school visit, a boy about Al’s age approached me and said that his father had died only six months before. I was so relieved when he added that he had loved the book and laughed all the way through. That meant so much to me because, although Time Traveling with a Hamster is primarily a fun adventure story, the bereavement at the story’s heart is not something I treated lightly.

As adults, we know that some things in life require more courage, more daring that we think we have. Al discovers that acting on that courage brings rewards greater than he ever imagined.

I loved writing Time Traveling with a Hamster. I sincerely hope that you and your readers love it too.

Praise for Time Traveling with a Hamster

★ “Welford’s voice for his protagonist is engaging, pragmatic, and solid… Nods to classic time travel stories will delight some readers; those merely looking for a page turning adventure will find that and more.” —Kirkus Reviews, starred review