An essay from Jeffrey Michael Ruby 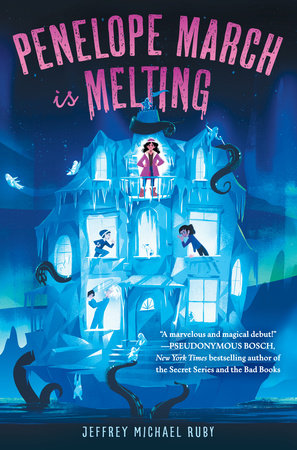 I was standing in my boxers with my head in the freezer the first time I saw a whole new universe.

It was the hottest day of a punishing Chicago summer, each breath in that icebox producing delicious misty clouds of relief, when I saw the ice tray. Every ice cube, every crack and crater and sapphire swirl, looked enormous. Each one was its own planet with mountains and mysteries. Like a lightning bolt, an idea hit me: What if a whole world was in that ice cube, and that world was melting?

I began writing a weird story about a town on an iceberg floating in the middle of nowhere. It had cars and schools and churches and hockey teams. One day it begins to melt and no one notices, except a shy sixth-grade girl named Penelope March. My goal was to come up with an epic adventure that was scary and funny and full of plot twists and memorable characters.

Other weird notions popped up: magical cookies that made you see the future; a fleet of military penguins; a mysterious chainsaw-wielding old man obsessed with ice sculpture. And a terrifying villain, a former mermaid who became a powerful sea monster that could change her shape into anything: a giant squid, the sharpest knife on earth, a plunger.

My regular job is as a dining critic for Chicago magazine—obviously a different kind of writing from middle grade fiction. I think about food constantly and I was energized to try something different. So I took food out of the equation entirely. I decided the people in Glacier Cove would eat nothing but turnips, which somehow grew under the ice.

After writing 100 pages or so, I put the story aside. I didn’t know where it was going, and was too busy with my job and being a dad to figure it out.

“What happened to that book you were working on?” my wife asked.

I bluffed. “If I had a month alone without the kids, I could finish it,” I said.

You don’t say things like that to my wife. She urged me to get a cheap Airbnb somewhere quiet for a month while she dealt with the children and the bills and everything else. All I had to do was come back with a draft of the book.

What had I gotten myself into?

The cabin was in the woods in Arkansas and it smelled like Corn Flakes and mothballs. My only company was a mouse that skittered around the kitchen at night and some kind of fat woodchuck that sunbathed outside my window. I got up every day, hiked in the woods, came home, and wrote for 12 hours. Before bed, I watched scary movies while a bony tree tapped against the window. There were thunderstorms every night. I was terrified I would fail, and believed scaring myself even more would help somehow.

I felt a lot of pressure in that cabin. Some of what I wrote was good. A lot was terrible. When I got stuck, I had five tricks that helped.

After trying these tricks, and putting in the work, something great happened:

My ideas grew and intersected. And I left that cabin with a 360-page draft. I won’t bore you with how I went through 157 drafts of that book—and survived nearly as many rejections from the publishing world. I will say this: From the moment I stuck my head in that Chicago freezer to the day Penelope March is Melting released, five years had passed. The idea may have been the lightning bolt, but lightning disappears fast. It’s the storm that comes after that really matters.

Jeffrey Michael Ruby is the chief dining critic of Chicago magazine. He is the coauthor of Everybody Loves Pizza: The Deep Dish on America’s Favorite Food and has also played college basketball in Ireland, assisted in an autopsy, and sumo wrestled in front of 20,000 people in New Jersey. He lives in Chicago with his wife and three children. Penelope March Is Melting is his first novel. Visit Jeffrey at jeffrubymedia.com, and @dropkickjeffy on Twitter and Instagram.