About a Girl: Building the Story of Girl in Pieces By Kathleen Glasgow 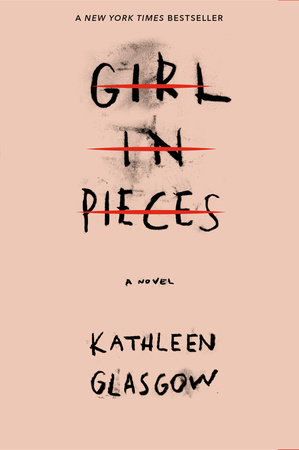 The first thing people ask me after reading Girl in Pieces is, “How much of Charlie Davis is you?”  My standard answer is, “I gave Charlie my scars and my emotions, but her story is her own, just like mine is mine and yours is yours.”

That’s one of the pitfalls of writing a contemporary, realistic novel: people often assume the main character is a thinly-disguised portrait of the author. No one ever asks J.K. Rowling if she has a lightning-shaped scar or what her grades were at Hogwarts!

Charlie Davis struggles with depression and self-injury, just like I did as a young woman.  But her story also belongs to the more than one million young women in the United States who also self-injure. On the surface, a reader might think I’m telling my own story through the character of Charlie Davis, but I’m not.  The story I’m really telling is the story of what it’s like to be a girl in the world.

At a recent literary event, I sat with a group of women in their fifties and sixties. It was my job to pitch my book! Tell them everything they needed to know so they’d buy it! Recommend it to their friends! I worked hard to convince grown women with full lives that they needed the story of a 17-year-old girl who cuts herself.

There was silence. Then one woman, with magnificent frosted hair and spectacular red lipstick (a passion of mine) said, “I’m a school nurse and you would not believe how many girls come through my office with cuts and scratches.”

Another woman said, “I teach fifth grade and the girls are so anxious about tests that they put tiny pieces of glass inside their watchbands and push on them if they miss a question.”

They started talking. They knew people who had a daughter who cut. Or a daughter who starved herself. Someone’s cousin’s daughter was seventeen and a full-blown alcoholic. One woman said, “I hate my upper arms and I don’t know why I can’t find any damn dresses that aren’t sleeveless! I am fifty-five and I wish I didn’t give a damn, but I do.”

One day a woman emailed me and thanked me for writing Girl in Pieces. She said, “You know, even though I’m of a different generation, when women may not have chosen cutting, there were all sorts of hair shirts we put on to relieve stress. Drugs and alcohol worked wonders until they didn’t work at all.”

One day a girl wrote to me, “I’m 21 years old and I read your book in 12 hours straight. I couldn’t put it down. I’ve never related to something so much. I’ve suffered from depression since I was 12 years old. I’ve cut my arms and legs and shoulders open to numb the pain. It’s been a journey. Charlie’s story hit me close to home. I felt like I knew her.”

So you see, I didn’t so much build the character of Charlie from myself as I built her from years of listening to girls and women talk about what it’s like to be in pain, to be ignored, to feel body shame, to feel unloved, unlovely, unwanted, un-smart, not needed, pushed aside.

When I was fifteen and looked on the library shelf, I didn’t find myself. They didn’t have books about cutting back then. I had to wait until I was well into my twenties to discover books like Speak, Girl, Interrupted, Prozac Nation.

I wrote a book about being a girl with scars so girls with scars could find themselves on the library shelf. But it’s also turned out to be a story about the scars we have on the inside, too, the ones that keep us from wearing sleeveless dresses even when we are well into our fifties and should damn well not care, anymore.  And we should probably be talking about that.

Praise for Girl in Pieces

★ “In Glasgow’s riveting debut novel, readers are pulled close to Charlie’s raw, authentic emotions as she strains to make a jagged path through her new life. Love and trust prove difficult, and Charlie’s judgment is not well honed, but her will to survive is glorious.”—Booklist, Starred Review

★ “[Readers] will find themselves driven to see Charlie’s story through. They will better understand a world that often makes no sense to outsiders. Glasgow’s debut novel is a dark read, but the engaging writing will win an audience for [Glasgow].” —VOYA, Starred Review