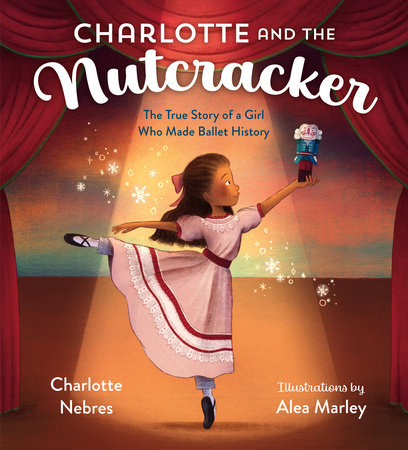 Charlotte and the Nutcracker By Charlotte Nebres; illustrated by Alea Marley

A reimagined and modern take on the holiday favorite, this picture book weaves together the classic Christmas tale of The Nutcracker and the true-life story of 12-year-old ballerina Charlotte Nebres, the first Black girl to play Marie in the New York City Ballet’s production.

The only thing Charlotte loves as much as ballet is Christmas. So, when she gets the opportunity to play Marie in the New York City Ballet's The Nutcracker, she leaps at the chance.

Dancing takes practice-hours of adjusting her arms and perfecting her jumps. With the help of her Trinidadian and Filipino families, encouragement from her sister, and a view of her mom and dad in the audience, Charlotte finds the strength to never give up.

In this spectacular debut full of fluid, dynamic illustrations, Charlotte provides youngsters with a multicultural tale of family, dance, and holiday cheer. 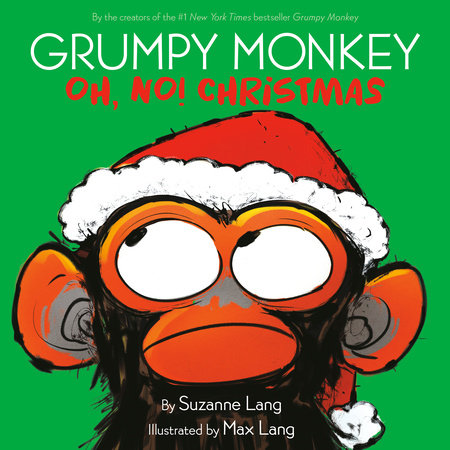 NEW YORK TIMES BESTSELLER • Jim Panzee, our favorite grumpy monkey, is feeling like quite the Scrooge this holiday season!

It's Christmas time in the jungle, and Jim just can't get into the holiday spirit. Then Jim eats a "festive" green banana that makes him feel sick. Now everything seems worse. While all the other animals in the jungle are ready and eagerly awaiting Christmas, Jim can't stop feeling that this time of year stinks. But with his good friend Norman's help, Jim discovers that focusing on the good things around him instead of his own problems, is a reason to celebrate. 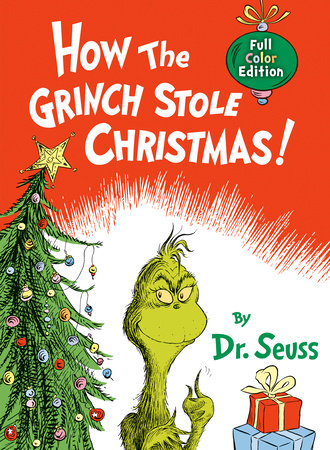 How the Grinch Stole Christmas! By Dr. Seuss

Grow your heart three sizes—and dazzle your eyes—with this FULL COLOR edition of the beloved holiday classic How the Grinch Stole Christmas!—the perfect gift for under the tree and for Dr. Seuss fans and collectors any time of year!

This season of giving, give a gift that's never been given before—a full color edition of How the Grinch Stole Christmas! Originally published in 1957 using just 2 different colored inks (red and black), this new, jacketed edition features Dr. Seuss's original illustrations in full color for the very first time—the way he'd have likely colored them had he published the book today! While this edition is not a replacement for the original, we think it makes a cheerful addition to the Dr. Seuss canon that is bound to appeal to Dr. Seuss fans of all ages. PS: The drabness of the Grinch's life in his cave compared to the happy, vibrant life of the Whos in Who-ville has never been easier to see! 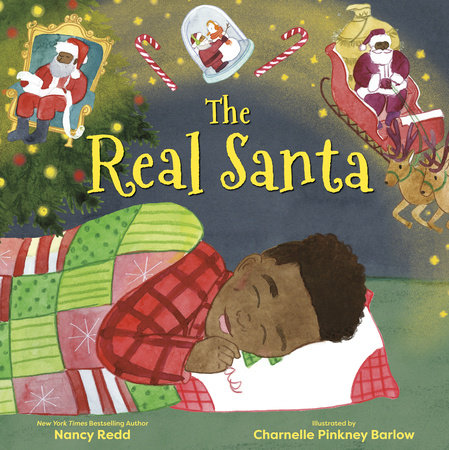 Join one Black family on their journey to discover what the real Santa looks like in this joyous tale celebrating identity, family and holiday cheer, from the New York Times bestselling author of Bedtime Bonnet.

It’s not Christmas without Santa! But what does Santa truly look like? Does he match the figurines on the mantel, or the faces on our favorite
holiday sweaters? Does he look like you or like me?

Find out in this joyous and cozy celebration of family, representation, and holiday spirit! Destined to be a new classic, and perfect for any child looking to see some of themself in Santa Claus. 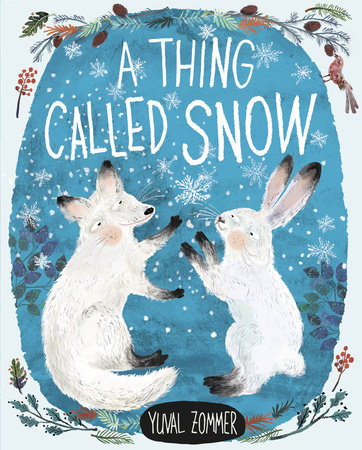 A Thing Called Snow By Written and illustrated by Yuval Zommer

In this follow-up to the holiday hit The Tree That's Meant to Be, a fox and hare discover the magic of a first winter snowfall.

Fox and Hare were born in the spring, but the seasons are changing and they hear snow is on the way. "What is snow like?" they ask all the forest animals, and each gives a different answer ("Snow is white, like your fur."). But their questions are soon answered when thick, fluffy flakes start to fall. SNOW! Young readers will share the magical feeling of a first snowfall as they see the two best friends marvel in nature's beauty.

This is a charming holiday story that feels instantly classic and yet fresh and new at the same time. With heartfelt themes of friendship, curiosity, and the wonder of nature, it's a story families will love cozying up with together. 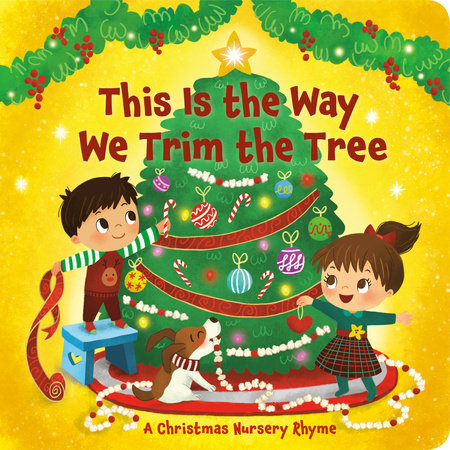 This Is the Way We Trim the Tree By Arlo Finsy; illustrated by Yuyi Chen

Little ones will love this fun Christmas twist on the popular nursery rhyme “Here We Go ‘Round the Mulberry Bush.”

Celebrate the joys of the Christmas season with this festive board book! Children and grown-ups alike will enjoy singing along to the tune of "Here We Go 'Round the Mulberry Bush" as the characters trim the tree, hang their stockings, sing carols, and much more!

This sweet board book makes an ideal stocking stuffer and is the perfect way to spread some holiday cheer! 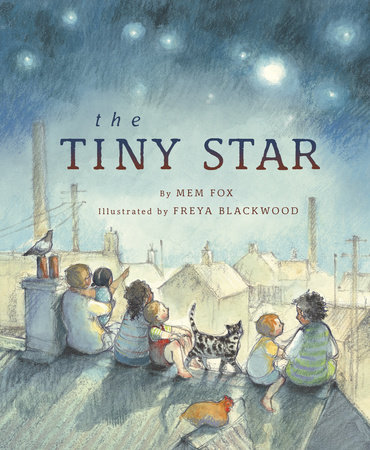 The Tiny Star By Mem Fox; illustrated by Freya Blackwood

A beautiful and gentle story about life and death from beloved author Mem Fox, illustrated by rising star Freya Blackwood; its star imagery, and sense of rebirth make it a perfect choice for the holiday season.

In this touching and timeless story, a star falls to earth where it becomes a baby and is embraced and cared for by the community. Renowned author Mem Fox's tender text about the journey of life is beautifully rendered by Freya Blackwood whose luminous illustrations capture the warmth and complexity of growing up. This a unique and moving story to be cherished by all ages and shared for generations to come.

"Mem Fox's books are like a warm blanket; they have a way of making the world seem a little cosier." --Sunday Age (Australia) 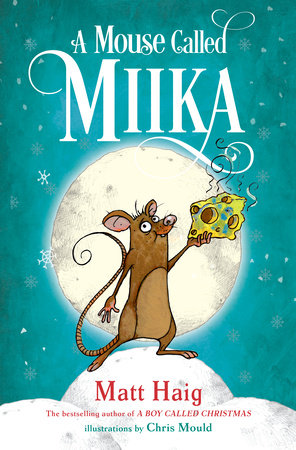 Ratatouille meets Roald Dahl in the funny and fantastical story of a determined mouse on a mission to procure the world's tastiest cheese. From the author of A Boy Called Christmas–now a Netflix movie starring Kristen Wiig, Maggie Smith and Henry Lawfull!

When Nikolas left the only home he had ever known, it was a mouse named Miika who kept him company, and it was Miika who accompanied him on his journey to the Far North, in search of his father. But before the events of A Boy Called Christmas, this little mouse was the hero of his own story.

A Mouse Called Miika is an epic adventure story on a miniature scale. It's a tale of mice and men (and more mice). It is about one independent mouse who gets fed up with the other mice, and sets out on a quest of his own to prove that cheese exists, and learns to appreciate other creatures. It is also a tale of great love (of cheese) and great danger. And learning the lesson that, with cheese, as with life, what matters most is not how strongly you smell, but how strong you are on the inside.

Funny, cheeky, wise, and packed full of Matt Haig's signature warmth. This is set to become a year-round children's favorite.